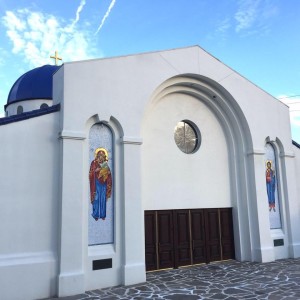 In 1933 a small community of Greeks – mostly Greek Immigrants, settled in Long Beach, California. As their families began to grow- a need developed for a Greek or “Hellenic School” to perpetuate the ideals and traditions of the Greek Orthodox faith and culture throughout the generations to come. A Hellenic School was started, and on October 4, 1937 the Long Beach Parish Hellenic Community was granted a Charter to form a Church. In 1939 the first parcel of land for the church was purchased at the southwest corner of Pacific Avenue and 17th St. in Long Beach, California.

The late Patriarch Athenogoras I, then Archbishop of North and South America, visited Long Beach and the founding Fathers. He encouraged and supported the community to continue efforts to build a church for the community.

Following appointment of the Building Committee and preparation of building plans, the Archdiocese established the city of San Pedro and Vicinity within the jurisdiction of the Long Beach Church. As a result, a new organization was formed and named the Hellenic community of Long Beach – San Pedro and Vicinity. In 1947 the original church construction began with the ground breaking on Pacific Avenue.

The Greek Parishioners did not wait for the building of the Church to organize themselves. Sunday school was conducted in private homes by volunteers in the late 1930’s and 1940’s. A church choir was organized in 1947, two years before construction of the original Pacific Avenue church. Also a “Philoptochos” Chapter (to help the sick and the poor) was organized on September 8,1937.

August 15, 1949 marked the “Official Opening” of the Assumption of the Blessed Virgin Mary Greek Orthodox Church in Long Beach, California. (August 15th is also a highly recognized religious holiday within the Orthodox Faith).

In 1986 Parishioners realized that their small Church could not accommodate the growth over the last 40 years and voted for a new home for the Church; and with the help of a generous donor the new property on Colorado and Pacific Coast Hwy was then purchased.

The doors of the new Church on Colorado were opened in December 1, 1991.

Folk dance participation began in 1980 with annual participation in the Greek Orthodox Folk Dance Festival (also known as FDF). FDF is a statewide folk dance festival which had developed in various Greek communities. Over 2000 people attend the FDF which is usually in February over a 4-day period. Venues include the Ontario Convention Center and the Anaheim Hilton and Convention Center. At this time, our church has 4-5 groups of several ages. They are well organized and perform regularly.

You can find more information on our official website.